UGBS Dean Shares Insight on Teaching and Learning in The Pandemic: Challenges and Opportunities for The Future of Higher Education

UGBS Dean Shares Insight on Teaching and Learning in The Pandemic: Challenges and Opportunities for The Future of Higher Education

The Dean of the University of Ghana Business School (UGBS), Professor Justice N. Bawole, on the 17th of November, 2021, attended a virtual meeting organised by the University of Surrey. He spoke on the challenges and opportunities for the future of higher education.

Prof. Bawole informed participants about how the University of Ghana has always had physical lectures rather than virtual education. Therefore, to suddenly commence a virtual form of education was not easy, as people did not readily accept e-learning as an authentic form of studying. However, due to the pandemic, the university has had to adopt and adapt to virtual teaching and learning, despite some of the challenges they face. He described the challenges as a “moving problem issue”, where once one problem is fixed, another problem comes up.

Dr. Abdul-Razak Alhassan, a Senior Teaching Fellow at the University of Surrey, raised a question asked by a Tanzanian student studying in the UK. She wanted to know if universities took into consideration whether or not students had the devices and everything they needed to study online. Prof. Andy Adcroft, the Deputy Dean of Surrey Business School, in responding, said they assumed that students who were about 24 to 26 years old were mostly online and hence would take to e-learning easily. He also added that they assumed if they replicated the way physical classes were held, then it wouldn’t make much difference. He said it was due to the urgency to get things done during the pandemic that there was no room for innovation and assumptions had to be used.

Dr. Alhassan further spoke on the matter, using some of his students as an example. He said that a student informed him that she only had access to a mobile phone, which she shared with the entire household and therefore struggled to get her assignments done. Prof. Bawole also added that the technological challenges were not only faced by students but by some lecturers as well. He explained that some lecturers had been used to the whiteboard method of teaching and did not have or use computers. Hence, some struggled to teach online during the earlier period.

Furthermore, Prof. Bawole went on to say that some students were from rural areas and did not own mobile phones or laptops so they could not join any of the online lectures. However, he had appealed for some laptops for such students and has received 40 of them. Another challenge mentioned was how, unlike in developed countries, students in the University of Ghana were unfortunate to have access to WiFi everywhere. Another important issue was that of culture and behaviour. In expatiating, he mentioned how students leave their microphones on, and everyone hears the noise in their background, which disturbs the class and makes teaching and learning difficult.

Despite all these, one positive outcome is that now, a significant number of the lecturers and students who were sceptical about online classes have come to prefer virtual teaching and learning, and they believe that it is a good way to go. Nonetheless, this has also caused another challenge as the school has not invested in having both physical and online lectures. Because of this, when lectures are online, the school has to deal with a group of angry students protesting and also has to deal with another group of angry students during physical lectures.
The meeting ended with a question-and-answer session. 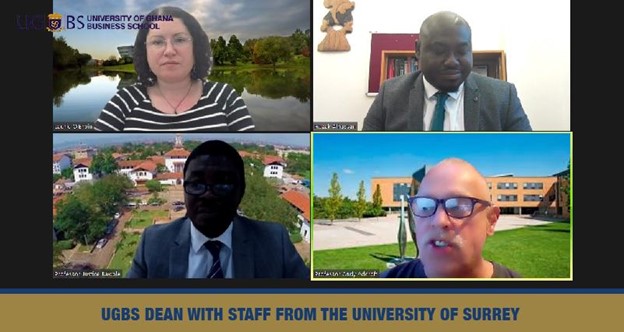