In a quest to provide world-class knowledge that gives students critical understanding and analysis of contemporary issues in information systems, Dr. Emmanuel Kolog Awuni, a Senior Lecturer with the Department of Operations and Management Information Systems (OMIS) at the University of Ghana Business (UGB) hosted Dr. Olayemi Olawumi as a guest lecturer during his Information System Security Class. The lecture which was on the topic “Data Security in a Smart Environment” was delivered via Zoom on the 21st September, 2021.

Dr. Olayemi Olawumi began his lecture with an emphasis on Smart Homes. In his definition of Smart Homes, he stated that “Smart Homes refers to homes that connect several devices (such as senors) and systems that can be accessed remotely, monitored and controlled with the use of various communication networks. He further added that Smart Homes comprises of three major areas: physical components, control systems and communication systems.

He indicated that his lecture will be centred on the implementation of Smart Homes for health care purposes, specifically on Smart Environment for Assisted Living (SEAL). The Guest Lecturer revealed that SEAL was developed for the elderly and disabled people as part of an EU project in 2012 where he was tasked to work as a security researcher.

Revealing why he undertook research in Smart Homes security, he indicated that questions around the security vulnerability of Smart Homes have been the topic for discussion. He added that these discussions became more intense after some Smart Homes were hacked in 2013, 2017 and 2019. Dr. Olayemi Olawumi further pointed out that the objectives of his study were to investigate the security components of ZigBee and Bluetooth as well as design efficient techniques to enhance the security of transmitted data via wireless interfaces in Smart Home environments based on steganography and digital watermarking.

Dr. Olayemi Olawumi continued by shedding more light on ZigBee, which is a developing low-power wireless technology used for applications that require low data rates and close proximity. He added that ZigBee is based on the IEEE 802.15.4 specification and supports data rates up to 250 kb/s. He emphasised on the four concepts of ZigBee security which include: security level, trust centre, authentication and data encryption, and integrity and freshness of data.

The speaker further emphasised on attack scenario definitions and also proposed countermeasures used in mitigating these attacks, namely; user awareness, risk assessment, intrusion detection and prevention system as well as integration of time stamping mechanism. The lecturer ended with a brief discussion on steganography and digital watermarking which are designed to ensure smooth data transmission in Smart Homes. The insightful educative session concluded with a question-and-answer session.

Dr. Olayemi Olawumi is a Manager, in charge of Technology Assurance at Sainsbury’s Bank, Edinburgh, Scotland and a Senior Research Fellow at Centre for Multidisciplinary Research and Innovation. He had his Bachelor’s degree in Computer Science in Lautech, Nigeria, and completed both Master’s and Doctoral degrees at the University of Eastern Finland. As part of his career journey, he started as a banker in Zenith Bank, Nigeria then after PhD joined ICON Clinical Research Limited, Ireland, where he focuses on security and patch management. He also worked with PricewaterhouseCoopers (PWC) UK. 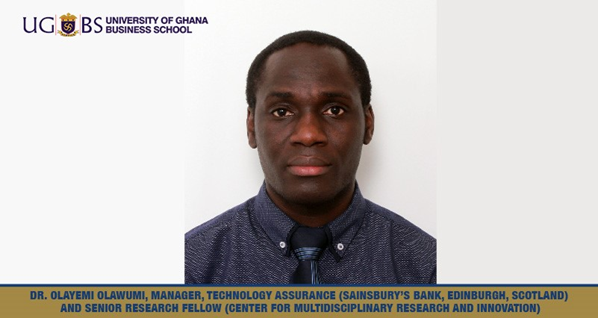