UGBS and UNICEF Present a Public Lecture on the Growth of Antipoverty Transfers: Lessons for Ghana

UGBS and UNICEF Present a Public Lecture on the Growth of Antipoverty Transfers: Lessons for Ghana

Professor Armando Barrientos presented a public lecture on The Growth of Antipoverty Transfers: Lessons for Ghana. The lecture which was jointly organized by the Public Administration and Health Service Management of the University of Ghana Business School and the United Nations International Children's Emergency Fund was held on the 16th of February, 2016 at the graduate campus. Professor Armando Barrientos is a Professor of Poverty and Social Justice at the Global Development Institute at the University of Manchester in the UK.
In attendance were Professor Augustin Fosu, a senior lecturer with the Institute of Social, Statistical and Economic Research (ISSER); University of Ghana, Professor Joshua Yindenaba Abor, the Dean of University of Ghana Business School, Dr.Justice Bawole, Head of PAHSM and coordinator for the public lecture, Dr. Esther Ofei-Aboagye, a Senior Social Policy Expert and a Former Director of Institute of Local Government Studies, Mr Richard Adjetey, Rector for Social Protection of the Ministry of Gender, Children and Social Protection, as well as lecturers, students and staff of the business school. 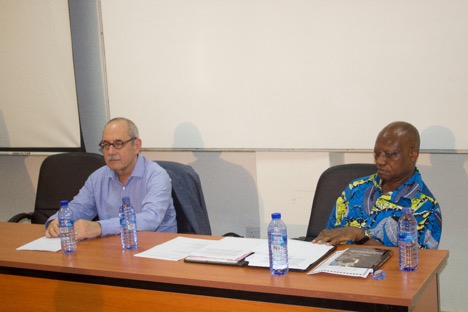 Professor Armando Barrientos in his presentation touched on the growth of antipoverty transfers in low- and middle-income countries. According to the Professor, rapid expansion of social assistance and large scale programmes provide transfers in cash and in kind to households living in poverty. He added that, globally, 1 billion people reached by transfers have made a contribution to poverty and inequality reduction. He associated this with three types transfer programme; First, Pure income transfers like Social pensions, child grant. Second, Income transfers combined with asset accumulation such as human development, Infrastructure, community and finally the integrated poverty reduction programmes. He stated that, these programme types reflect poverty diagnosis, income or consumption deficits and productive capacity.
He added that, the growth of social assistance is as a result of financial crises and adjustment in the 1980s and 1990s which has led to structural deficits in social policy in developing countries.
He further noted Institutionalization and Finance as challenges. He emphasized that, institutionalization involves, legal status in terms of operations and entitlements, strengthening implementation capacity and institutional coordination within government. With regard to financing social assistance, he mentioned that most countries spend between 1% and 2% of GDP in social assistance whiles minority country take less than 1% of the GDP.

Drawing the curtains down to Ghana, Professor Armando Barrientos noted that his lessons for Ghana is to adopt stronger policy activism to help achieve the sustainable development goal in 2030. Improving taxation is also fundamental to the long-term sustainability and legitimacy of emerging social assistance institutions. Also human development is key to the long-term effectiveness of antipoverty transfers. Finally broad political support is needed to sustain antipoverty transfers; in the long run, policy feedback and programme effectiveness will help achieve this.

In his conclusion, he stated that rapid growth of social assistance in low- and middle-income countries has made a contribution to global poverty reduction and signals the emergence of welfare institutions.
Dr. Esther Ofei-Aboagye, a Senior Social Policy Expert and a Former Director of Institute of Local Government Studies stated that, Ghana as a country has embarked on quite a number of antipoverty programmes in the 1970’s, 1980’s and 19190’s. She emphasized that in 1990, there has been proliferation coming from the Government and NGO’s to support antipoverty in the country. But as a result of the difficulty involve in coordinating the NGO’s and Government to produce a required effect, a rationalization study was initiated in 2013. In 2013 it became evidence to adopt the coherence framework to bring all these agencies together as well as reduce gaps, strengthen its target and ensure monitoring to achieve the kind of impacts the country seek for.
In his closing remarks, Dr.Justice Bawole, head of PAHSM and coordinator for the public lecture extends his profound gratitude to all present and acknowledged UNICEF efforts for facilitating the programme. 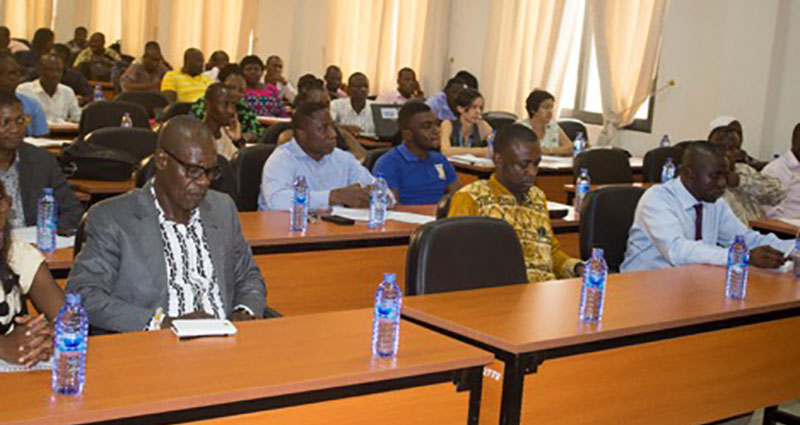 A cross section of audience presents at the lecture