UGBS Alumnus of The Month Of October, 2018 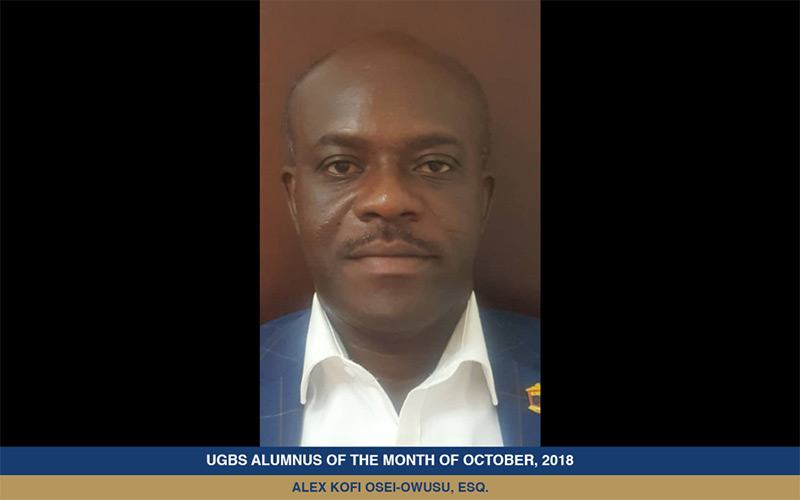 Lawyer Alex Kofi Osei-Owusu is a licensed barrister and solicitor of the Supreme Court of Ghana with 15 years of experience.

Alex was a Senior Associate at Akufo-Addo, Prempeh & Co. Law firms from 2003 to 2014. Within the same period, he served as a director for many reputable companies including Quantum Group, Cardinal Petroleum Limited and A. A. Minerals Limited. Since 2014, he has been the Senior and Managing Partner of his own law firm, Cardinal Law Group.
Alex had his primary education at St. Paul’s Primary School at Amakom in Kumasi and proceeded to St. Hubert Seminary Secondary School for his secondary education. He is a product of the University of Ghana Business School, Legon, then School of Administration where he graduated with a B.Sc. (Hons) Banking and Finance in 1993. He is an active member of the celebrated “SOA 93” group. He obtained his Master of Business Administration in 2002; in the same year, he also completed the Ghana School of Law and was called to the bar. Having also studied at the Alliance Française in Accra, Goethe-Institut and the Ghana Institute of Languages, Alex is fluent in French and functional in German and Spanish.

He is a member of the Ghana Bar Association, the American Chamber of Commerce-Ghana and the International Chamber of Commerce-Ghana.
Having travelled across five continents, Alex is an active practitioner, specialising in contract, commercial, financial and energy cases. Alex has conducted and won landmark cases, some of which are reported in the Supreme Court of Ghana Law Reports.
He is married and blessed with three children and currently mentors two students at the University of Ghana Business School.