Alumnus of The Month of November, 2018 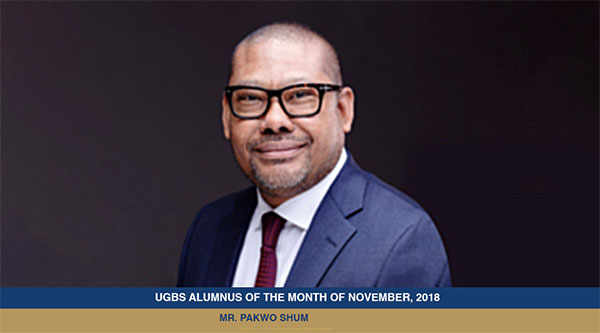 Mr. Pakwo Shum is the founder of Shum & Co., a company that has promoted the start-up of businesses including Air Partners Liberia, Mangifera Energy, Travel King and Adeva Gold Resources. He holds membership in several organisations including Full Gospel Business Men’s Fellowship International (FGBMFI) and the Young Presidents Organisation (YPO).

He studied at the Ghana International School, and the University of Ghana where he gained a bachelor’s degree in Administration.

Pakwo has gained distinction as an entrepreneur and the visionary behind the start-up and development of a spectrum of diverse companies, bringing each enterprise to commercial success since 1988. In 2006, he founded Aviation Alliance Ltd which is a sales agent of Delta Air Lines in Ghana. As Ghana’s dedicated General Sales Agent, he led the company to win several awards including four CIMG Airline of the Year Awards, three National Aviation Awards and an Executive Excellence Award for International Airline of the Year. Aviation Alliance Ltd. now represents Delta Air Lines in other countries like Côte d’Ivoire, Liberia, Sierra Leone, and Niger.

In 2012, he was a recipient of an FGBMFI Pillar Award and the Anglican Bishop’s Award. He was named Best Entrepreneur of the Year - Airline Industry by the Entrepreneurs Foundation of Ghana in 2013. He serves on several boards of organisations including Explainer DC, African Entrepreneurs Hub, AI Energy, Newco Catering and Logistics, and the American Chamber of Commerce in Ghana.